Have you over got the below error when your Radeon Settings were not opening?

I also had it and at first, I thought that it was because of the updated driver so I downgraded to the previous one but the same issue prevailed. We tried to uninstall and then reinstall the driver again but it was of no use. The error seemed to be strange and had something to do with either the Radeon settings program being not updated or the version of the driver was not updated. It was for sure one of them!

This article explains step-by-step how to fix Radeon Settings and Driver Version Do Not Match error in 2022. We go through a series of troubleshooting tips first then we offer the top solution to this problem for you.

Fix: Radeon Software Version and Driver Version Do Not Match

Be aware: Keep in mind that in Reddit threat if you leave any of the value blanks then this might not fix the issue but the setting will not open. You shall get a loading cursor sign and nothing else shall happen how many times you try to open.

One of the users has also suggested getting driver number from the device manager but we feel that the DirectX diagnostic tool is much easy to use. Still, if you want to do it then 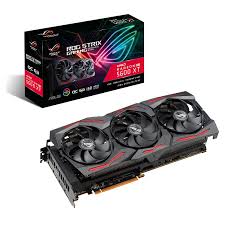 Before moving further ahead you need to keep one thing in your mind that updating to the latest graphics driver is not mandatory or required though a new version is available. If you encounter issues with the performance of the system, software, and graphics hardware then updating is not required.

Recommended:  Use Keyboard Shortcuts To Turn Off Monitor in Windows 10/11

You need to do this for the following circumstances:

Now, before you install the graphics card you should always review the release notes for information on supported graphics products, features, and performance improvements, fixed and known issues.

READ ALSO: How To Configure Pen Settings in Windows 10.

This is a small application that is designed to detect the model of its product as well as the version of Microsoft OS installed on your system, once it has been successfully detected, the shall display the latest compatible drivers that you can get for it.

This tool is used with systems running Microsoft Windows 7 or 10 equipped with AMD Radeon graphics, AMD Radeon Pro Graphics, or AMD processors with its graphics.

If you are not a user of Windows 7 or 10 or for driver or software for other AMD products such as embedded graphics, chipsets and many others then you need to refer to the section of AMD product selector to get help.

To find the latest ones you need to follow the steps below:

You need to select the desired version and the driver package shall begin to download and install. 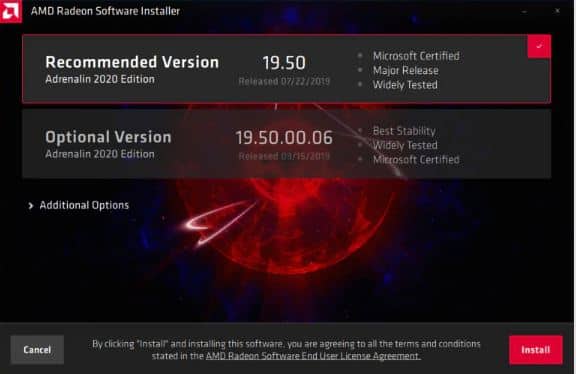 Note: If this tool is not able to find compatible drivers or you are looking for an earlier version then you might search for it using the AMD product selector.

This on the support page is a menu-driven system that allows users to specify their AMD product by selecting it from the list manually. You might also type in the model number of your product there in the search field or scroll through the products on the drop-down list that appears.

If you want to locate drivers or software for this then you need to follow the steps below:

Professional Graphics: These are common in systems deployed for business and research reasons.  They are designed for use in design and manufacturing, media and entertainment, as well as the Health and Science industries. Some examples include Radeon Pro WX Series and AMD FirePro Series Graphics

Processors with Graphics: These are also known as APUs, this type of microprocessor is used to combine both the Central Processing Unit (CPU) and the Graphics Processing Unit (GPU) into a single chip and are mostly used in desktop and laptops PCs as well as workstation systems.  Some examples include AMD Ryzen Processors with Vega Graphics and AMD A-Series with Radeon Graphics Processors.

Chipsets: A motherboard component is used to manage data communications between the CPU or APU and devices like storage, ethernet, and USB controllers.  These are designed to work with a certain family of CPUs and APUs of the same socket type. Some examples include AMD Socket TR4 X399, AMD Socket AM4 B350, and AMD 990FX.

Embedded: These products are designed with the purpose to deliver high-performance graphics for embedded apps which are found often in smaller forms or thin clients. Examples include AMD E9950 and AMD 785E

If you are not able to find them using this then your card might have been customized and pre-installed in an OEM desktop or laptop and thus these are only available for the OEM partner.

If you want to find the previous version for your product then you need to click on the previous link which is present there at the bottom of the driver’s section.

Driver and support page for this Vega is 64 is used in the exampled shown below.

Recommended Driver has passed some extensive internal quality assessments and received the WHQL certificate whereas the other one provides day on support for new game titles as well as graphics products that launch between recommended driver releases. 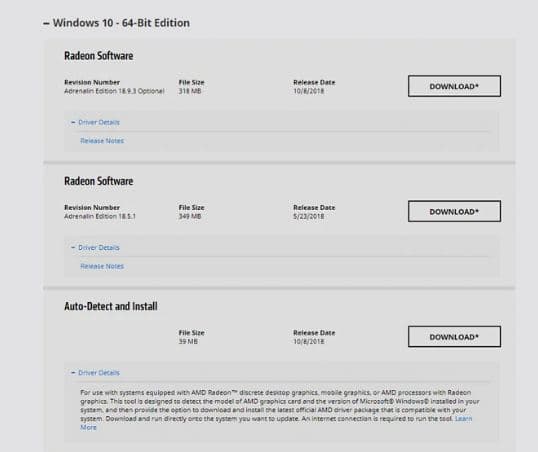 This has been a rather confusing issue for various AMD product owners. However, after following the steps above you have now fixed the “Radeon Settings Version and Driver Version Do Not Match Error”. You should now be seeing the same version in the driver and Radeon software.

I hope this was helpful for you, do let me know if you know of any alternative or even better method of fixing this?

How To Root Android Without Using TWRP Recovery & PC in 2022