In the world of Linux theming and customization, Xfce is a huge aspect. You can search for yourself as well that no other operating system offers such a kind of flexibility for customizing the desktop. Each environment is best for customizing the look of this system. This is no exception; instead, it has a huge library of themes and big community support. Such designs are being developed for your desktop. It is easy to install and customize the 10 best Xfce themes for Linux we have listed below. 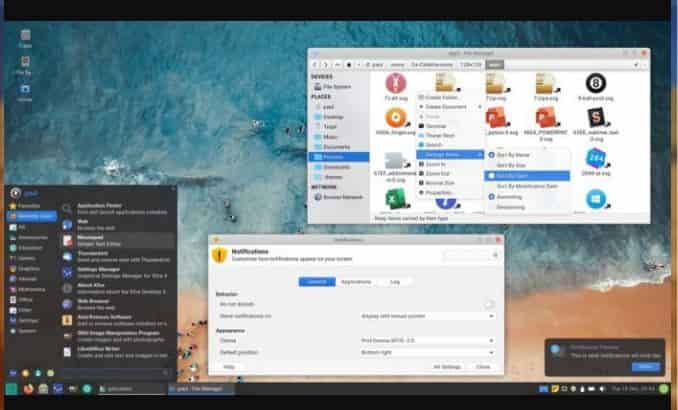 This is a simple yet minimalist layout. It was developed by PaulXfce who is famous for another theme PRO Dark. The aim behind this is to not cause any strain to the eyes, so you shall see that this is one does not carry any modern dark colour schemes.

This is quite popular among users. It is compatible with any of its version as it has three different editions for different kinds of GTK and Thunar File Manager. The best thing about this one is that it is clean and does not strain the eyes. This is the reason it is beneficial for those regularly use their desktop. GTK2 and GTK3 apps look no different in this one. You can customize various aspects of the design. It uses the Xfwm windows manager as the compositor.

Another interesting theme for all the users of Linux out there, it is quite simple and light in weight. It carries buttons which look like ones from the windows OS but carry a bit rounded design, which we saw on the material design language of the android system.

It shall provide your desktop with a modern yet flat look. User is given the change to select from 6 different bright and bold colours for the window title bar and border, like red, green, orange, blue and violet. The best thing about this one is that it carries a HiDPI version for 4K displays and is XXL version for the touch screen devices included within the package. Set it up with solid flat coloured wallpapers to get a minimal setup for this.

A popular design which does not completely changes the look of the desktop environment but only change the window panels. It carries two schemes of colours; black and white. In this, title bars are replaced with green, red and blue in the white variant.

All buttons are of grey colour in the dark variant. User can control the colour scheme of the background and title bar separately. Moreover, they can also enter into the window manager and apply it.

Read Also: The best collection of GTK Theme Packs and Icons for Ubuntu. 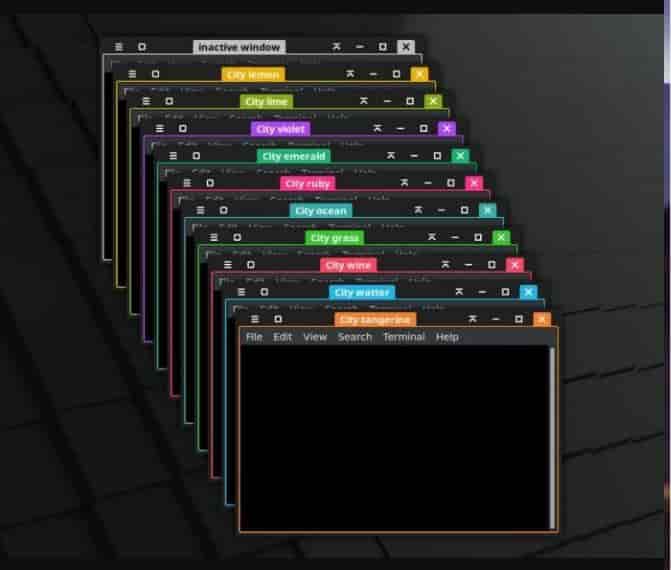 This is a beautiful yet elegant dark theme which changes the colour of the title bar and window panel effectively. It is from the same author who designed OneColor theme. It carries buttons and icons similar to it, but it does not paint the entire title bar.

It rather colours the close button, window title, and the window borders. It carries more than 10 variants like Wine, Grass, Ocean, Ruby, Emerald and many others. It has an additional version which does not have any of the present colours. The best thing about this one is that the user can customize the colour of their choice freely.

This is seemed to be a clone of Cupertino’s flagship OS. It is based on the latest version of macOS known as Catalina. The makes tried to replicate every single detail to provide it with the same look and feel for the users. It carries two different variants; light and dark.

It works best with the latest Xfce version 4.14. Default app icons are customized to look similar to Apple’s icons. Moreover, it also changes the look of the title bar and buttons. User can move the taskbar towards the top of the screen and add in a dock panel to get the same exact feeling.

Read Also: Top GNOME Shell Extensions and how to install them. 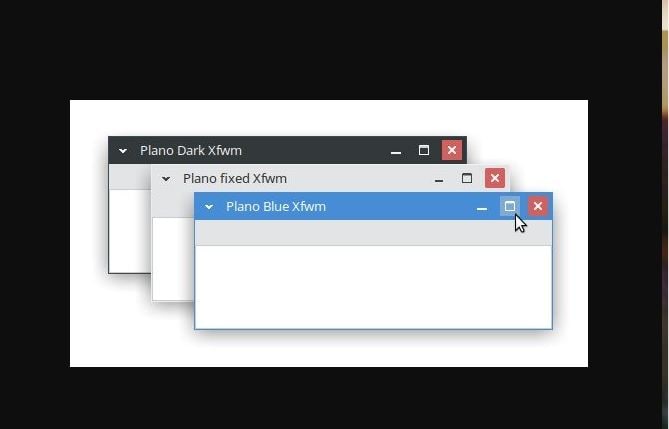 This is a clean yet neat flat design. A windows manager theme which is inspired by Microsoft’s very own Windows operating system. It carries three variants such as normal, modern, and XP. The latest variant of XP brings in the classic maximize button with 2px borders. Keep in mind that it is borderless to bring an immersive vibe to the window panels. Use Alt+RMB+drag if you want to change size in it. The best thing about this one is that it carries 3 different coloured versions known as fixed, blue and dark.

This is simple changemaker for the Xfwm window manager, the default for the Xfce desktop environment. This is the reason why this layout changes the windows and title bars look of different apps. This is considered to be the best add on for the famous Arc design. Moreover, it looks great with the Qogir layout.

Buttons of the title bar are flat along with coloured highlights. Icons look like the old school Windows XP icons. Keep in mind that the total attire of this is quite modern and soothing to the eyes. The best thing about this one is that it carries both light and dark variants to select from. 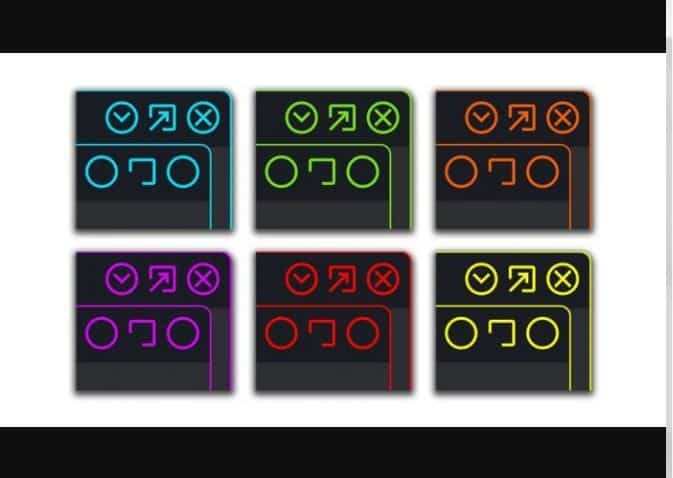 A modern looking design which is inspired by the neon light design, it looks beautiful with complete dark or pitch-black backgrounds. In this, the title bar buttons have a minimal appearance. For button icons there are two different variants; one is round with fewer details and other has better detail on them.

Read Also: Which Ubuntu Version is best for performance and stability?

This is another simple yet minimal design which is inspired by the Pop GTK layout from the Pop. It carries two variants; light and dark. Dark is default and normal for this. In this, the title bar button is placed quite nicely.

Its icons are inspired by the material design language. It carries rounded padding on the close button. Different colours are shown on the exit buttons by active and inactive windows. Get the full experience by setting it up with the Pop GTK layout. 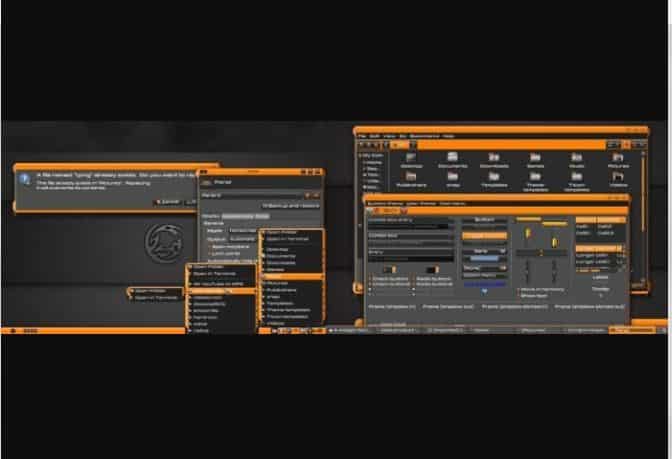 This is the most vibrant looking designs for Linux users. Originally it was developed for the Windows OS and later ported for the distributions. It is all black with a touch of orange accent which helps to bring a bold yet elegant look. Customize the toggle buttons as well as other aspects easily by using its theme manager. Icons of the folder managers have stainless steak like metallic texture on them. The best thing is that it is compatible with Widget Factory which is a popular customization tool.

A different looking design which has a futuristic techno vibe into it. The apps have bevelled edges. It carries quite a modern-looking title bar and 3D effect on the buttons. A carbon fibre texture is painted on the title bar. It carries a default typeface is a san serif font.

This is the reason the entire setup shall remind you of a supercomputer from the sci-fi movie. With the help of the windows manager software, you can easily customize the title bars and window panels. The improvised version carries repositioned title bars and bold borders with some ergonomic spacing.

How To Customize Your Xfce Themes Even Further

Have the files in had

Such files come in compressed file formats like ZIP, RAR, GZ and others. Extract it to the desired directory after downloading it from your favourite extractor software.

How to install Xfce theme (The correct way)

Here you shall find the one you have installed.

Different designs bring different changes to the look. Keep in mind that out of the box design shall not change everything; you might wish to change wallpaper, fonts and set up custom matching icons to bring completeness in it.

DekiSoft Note: Many types of wallpaper are available on the web, download and apply them. This is not rocket science by any means.

The entire look is changed when you customize icons.

Summary – Which one is the best for you?

That was all for the best Xfce themes that you can download for Linux distros. These include various beautiful and dark variants too. I hope you have now also learned to install and customize these skins too. Do share your desktops below in the comments. We would love to see your setup.

Manjaro Vs. Ubuntu (Latest) – Which is the best Linux Version?

How To Install and Play League of Legends Linux (2021)

How To Unblur Course Hero Documents and Answers Free In 2021